BARDSTOWN, KENTUCKY (Nov. 14, 2017) – Barton 1792 Distillery unveils the most recent limited-edition whiskey in its line of 1792 bourbons, 1792 Bottled-in-Bond Kentucky Straight Bourbon Whiskey. This Bottled-in-Bond expression remains true to its heritage and is a testament to the Bottled in Bond act, established in 1897, which revolutionized the quality of American whiskey and gave whiskey drinkers confidence is high-quality whiskey made by a legitimate distiller.

This well-aged bourbon came from barrels which were each filled during the same distilling season at Barton 1792 Distillery. 1792 Bottled-in-Bond was then bottled at precisely 100 proof and packs a bold taste followed by a lingering finish.

Tasting notes on this bourbon describe 1792’s unmistakable spice being met with “notes of charred oak and fresh mint. Subtle caramel apple tones are delicately balanced with the lingering essence of coffee and black pepper.”

This is the seventh limited edition release of 1792 Bourbon expressions. The Bottle-in-Bond joins previous releases such as High Rye, Sweet Wheat, Single Barrel and Full Proof Bourbons. The 1792 Bottled-in-Bond will be available at retail starting in December. One batch of this Bottle-in-Bond Bourbon will be released each year, in the fall. Suggested retail pricing is $35.99 for a 750ml bottle. 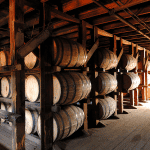