Where does the flavour come from? A tricky question but one I have endeavoured to answer for my own knowledge. I share this with you. Much of this remains a mystery to me despite extensive research. This post exclusively examines Bourbon as Scotch is an even deeper mystery.

My objective in writing this post was to identify where the various tastes in Bourbon arise. Although research exists much of it is far from definitive and even the experts are split.

I am no Scientist. In my Prelim Physics exam, I titled the paper ‘Chemistry’ and misspelt it! Wrong day! I failed both. Definitely not a Scientist!

We know that different grains impact different flavours right through the process. Compare different Mash Bills and you will be left in no doubt of this.

The absence of Iron through limestone filtration is really water’s key impact on flavour because iron in the water would give a bad odour and taste. You will hear people talk about Calcium making ‘sweet’ water. This is ‘sweet’ as in fresh not brackish or tainted.

The output from cooking and milling is starch which contains the sugars. The coarseness of the mix might impart some slight bitterness from the husks.

The most mysterious of ingredients is the yeast. Protected and developed often intact over many years. The impact can be tasted but is more difficult to predict.

I observe some yeast strongly promote one grain to the exclusion of other e.g. Four Roses single barrel which gives a big spice hit appearing to promote the Rye notes with less sweet notes in this Mash Bill; Corn 60%, Rye 35%, Barley 5%

In fermentation due to the action of yeast, the key outputs are Ethanol(alcohol), CO2(gas) which is allowed to dissipate, Esters and Congeners.

Esters mimic both odours and flavours in huge variety depending on the yeast. It is these that give the great variety of fruity and floral notes. Esters also are heavily used in Perfumes.

Congeners are impurities which can also break down into Esters and some nastier flavours, sulphuric, vegetal, rot and also tannins which deliver other more pleasant earthy flavours.

The longer the fermentation the greater the floral fruity flavours. Woodford ferments up to 6 days. Buffalo Trace for 3.

The output is called distillers beer which is bready, malty, sweet, caramel with fruits, cereal and nutty tones

Two-stage distillation does a great job at knocking out some of the more unpleasant flavours, notably some sulphuric, vegetal and rotting elements. The liquid entering the Stills complete with its flavours is vaporised and then condensed back to the potent White Dog.

Lower proof during distilling is claimed to contribute more flavour

The maturation process allows the Bourbon to get its colour and to get taste and aromas both from the char and from the Oak. The spirit being forced out of and into the wood by changing barometric pressure. That evaporating being replaced with air. As the barometric pressure reduces the spirit trapped in the wood is drawn back into the barrel bringing flavour with it.

Bourbon has very high levels of Phenolic Acid. Phenols give slightly sour and bitter flavours which can appear (to me) to give the Bourbon bite.

Char essentially also filters out off flavours. Filtering out some of the remaining harshness and off notes.

Much of the flavour imparted by the barrel comes from the Char but over time and seasons, the Oak itself contributes woody tones and tannins. Too long maturation and the woody flavours can become intense.

Sweet notes of vanilla and toffee

Earthy notes such as tobacco, coffee, chocolate, leather and may mimic other types of wood.

Nutty notes such as hazelnuts and almonds

Again the wood smooths and mellows the spirit rounding off any last vegetal, unripe, off notes or harshness.

Much has been spoken recently of guaiacol which comes from the charring of lignin in the oak and science now tells us with the addition of water releases some of the odours and tastes we detect. Lignin also contributes vanilla.

Scientific research has not provided all the answers to the flavour path through Distilling and Congeners are least well understood.

In case I have started to sound in any way authoritative, the foregoing paragraphs are a huge generalisation. However…..

Esters can mimic almost every smell and taste any Bourbon reviewer has come up with.

Different Mash Bills we know give very different flavours. So different grains flavour clearly makes it through the process.

No two barrels in the same distillery no matter how similar the ingredients and process ever taste identical. Now that is extraordinary and really screws Science – serves it right!

So subtle are aromas and flavours, it can be difficult to replicate a set of tasting notes on the same whiskey. There are times I think it best to stick to:- Sweet, Spicy, Earthy, Nutty, Fruity, Floral, Cereal and Woody for simplicity sake.

Much of the Process from water still shape, size, metallurgy and the cut to charring and maturation is about knocking out those unpleasant tastes and it is here that we most see the skills and knowledge of the Distiller.

We should be most grateful for those Master Distillers who by tasting the liquid through the process and making adjustments can produce the magic that is Bourbon and just leave it at that.

Enjoy your Bourbon content with the knowledge that delivering the flavour is somebody else expertise. Is it Cinnamon, Nutmeg or Cloves? Relax, pour yourself another all will become clear in time.

feature Image courtesy of Photo by Evi Radauscher on Unsplash 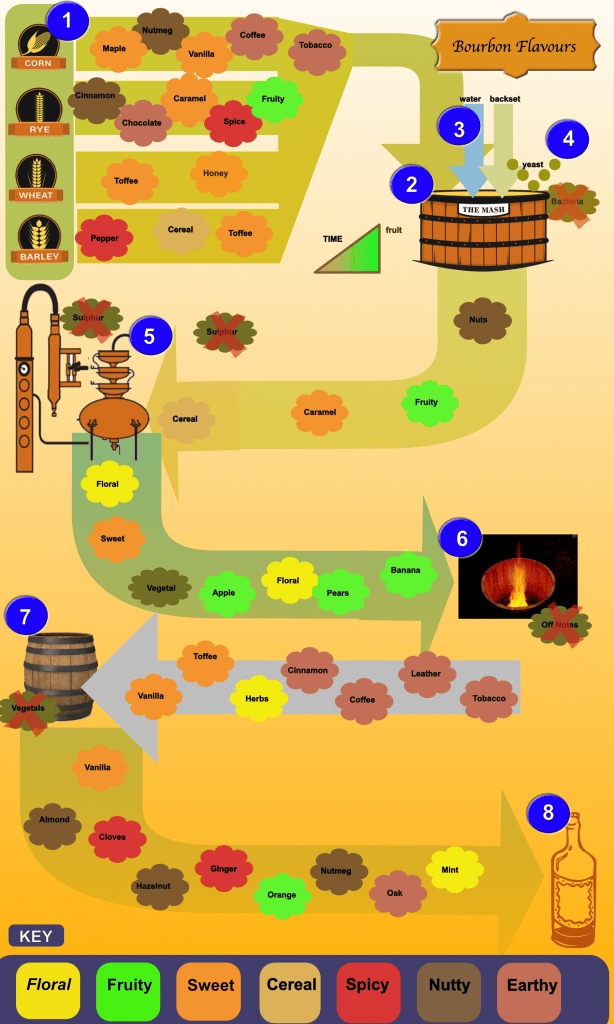 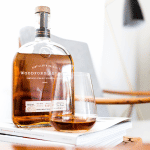 How to get into BourbonEditorial 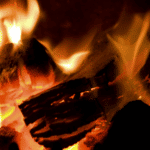 My Ascent from the fires of Peaty Hell to Smoky NirvanaEditorial