When we have learnt about whisky, sufficient to have some knowledge or now with the rise of social media, a little experience and a computer and too much time on our hands, we reach the complaining stage.

I have noticed the same phenomenon among commentators in both U.K. and the U.S. and by and large on the same topics.

The first shared gripe is the creeping demise of age statements. In Scotland the rise of NAS sees beloved classics disappearing or rumoured to be going, from Highland Park, Bunnahabhain and other classic names the eventual outcome still remains cloudy. In the U.S. it is more obvious, Knob Creek 9 year old has become a ‘small batch’ NAS, Elijah 12-year-old has lost its age statement. Now in the States, it is rumoured that many of these NAS versions will still be of the ‘same’ age. Really! So why remove the age statement? Just incase I suppose.

The traditionalist are suspicious of finishes. This depends on your sense of adventure. Scotch is being finished in a wide variety of casks from ‘special’ sherry to port and sauternes even, Bourbon finds itself with port and brandy finishes. Many consumers have enjoyed these finishes. Generally, in Scotland, this has not been a big gripe but in the U.S. whilst traditionalists object to the flavouring of Bourbon with fruits etc. to attract new consumers this creates a throwback to when bourbon was too rough to drink.

Pricing for Old and Rare

In the U.K. a huge complaint is the extraordinarily high prices some brands and most older malts are now attracting. In the U.S. the increased interest and limited availability have also pushed prices into four figures although not to the extremes which Scotch has reached! There is still sufficient great scotch and bourbon which can be sourced to adequately meet the wildest desires of the more frugal consumer

The next hot topic is chill filtration and colouring. No colouring or additives in bourbon is permitted at all. Most commercial distilleries chill filter. In the UK over 46% ABV higher does not need filtration. So colouring is a non-issue in America.

Colouring with the A150e additive (caramel) is allowed in scotch and extensively used in many whiskeys. Colouring is largely used to produce a more marketable product and those who use it claims it does not change the flavour.

Many Scotch whiskies use chill filtration. It is claimed by some that this removes the longer chain fatty acids altering the taste for the worse. Some malts specifically state ‘not chill filtered’. In the U.S. the distilled spirit does appear at least to my eye to contain more impurities so benefit from filtration.

The gripes are an integral part of the fun and enjoyment.

Alcoholic strength is another common discussion. Europe sells spirits in ABV – Alcohol by volume and 40% ABV is the lowest legal ABV. ABV is 50% of American proof, so 50% ABV is 100 proof. NOTE: To add to the confusion, the UK also has a historic proof measure now largely superseded by EU regulation and seldom used. U.K. proof was 1.75 x ABV – just ignore it completely as even the most devious of marketers if they used proof would prefer to exhibit the higher value of American poof, I contend. Cynic!

The ‘lower’ priced scotch tends to be bottled at 40 ABV. similarly, economic bourbons were commonly 45% but some have on occasions migrated toward the 40% mark. Historically when U.S. brands reduced the proof from 90 to 80 there was an outcry and they quickly reverted to 90. Lower strength in the UK equates to more whisky from the barrel and the lowest tax payable as taxation is proportionate to alcoholic strength.

The moaners generally prefer their scotch at more than 40% ABV, just as in the U.S. any move to 80 proof is met with anger. My own opinion is strongly in favour of higher proof as this gives me the choice to dilute or not to dilute.

We object to the less authentic marketing statements but generally live with it. In the U.S. claims of frontier origins and long departed originators are largely but not universally as false as the dates of origins claimed but we accept these as marketing with a knowing look. In Scotland particularly the origins are more authentic and the history less uninterrupted. Recent marketing efforts invoking highland roots, mythical creatures and nordic warriors raise eyebrows but whiskey drinkers moan but have learnt to be patient assuming the great will survive and prosper and the poor disappear. If the whiskey remains fine there will be no revolt other than with our wallets.

Brands are being more cautious now as the marketing of ‘age good’ now causes problems in selling non-age statement, lol. Millennials too are more suspicious and resistant to the false heritage claims and they are the growth market.

A common shared complaint was that older whisky was better. Few of us have either the tasting libraries or financial means to buy very old bottles or the taste memory to actually verify these claims. It is easy to ignore that a lot of older whisky was probably poor and hence failed to survive. In America, the old pre-prohibition whiskey was often supplemented with dubious flavouring and was probably harsh and unpalatable compared to modern whiskey. Who cares anyway as long as the Distilleries manufacture ever improving whiskey.

A most interesting shared gripe is a negative opinion of the largest and most successful brands based apparently based largely on success alone. In my experience this is more a British than American trait, success being lauded in the U.S. where the old Presbyterian Scots attitudes eschewed it. Glenfiddich suffers unjustified sniping based on its world leadership. Yes, it is a light Speyside (the word incidentally ought to be strathspey – a minor gripe of mine) but Glenfiddich would not have created the sales it enjoys without being the quality consistent product it undoubtedly is. The same ‘sniffiness’ can be detected among the geeks for Jack Daniels. Like Brown Foreman in the UK Diageo also faces jibes but there is no evidence to equate size with any lack of quality as the dominance of Jonnie Walker and the excellence of many of their single malts demonstrate. We just love to have the odd kick at the establishment but would mourn their demise. Long may they prosper. I do always have Jack Daniels single cask on my shelf.

In the U.S. one last gripe is that anyone can produce Bourbon, just by buying spirit from one of the few big distilleries and having the product matured, bottled then marketed. Only a careful reading of the label and an understanding of the niceties of what is or is not permitted by law in that wording can reveal the process that underlies the whiskey. Bulleit from Diageo is one such product, not distilled for a long time by them but by others. In June 2017 Diageo opened its Shelbyville Bulleit Distillery to manufacture its own product. Even Wild Turkery was a NDP for many years although it was always regarded as an excellent product.

Laying aside our mutual gripes it is probably pertinent to celebrate what we have to celebrate in common. As was famously said the UK and the US are two counties divided by a common language, However, we seem to have got over our divided spelling of whisk(e)y and have moved on.

We celebrate that these are largely rural rooted craft industries manufacturing sustainably a quality product supporting the rural economy yet enjoyed by the wealthiest and poorest in society.

We celebrate the dedication and skill of the workforces to producing and developing a quality, consistent and innovative product serving both the mass produced and luxury markets.

We celebrate the dedicated and informed liquor stores, off licenses and specialist whisky retailers and barmen and women globally who advise or deliver our dram.

We have much to celebrate.

Most of all we celebrate a drink shared and enjoyed with family and friends at the happiest and saddest of times. We celebrate the role that whiskey plays in community as that most egalitarian of Ayrshire farmers, Robert Burns wrote.

“Freedom and Whisky gang the gither” 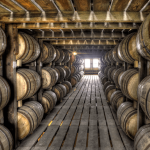