Of Whisky Tax and Productivity

The 2018 Scotch Whisky Economic Report reveals insights on a thriving industry in a changing world.

The figures show the Gross Value Added (GVA) of Scotch Whisky  which has gone up 10% to £5.5bn between 2016 and 2018, as a result of Scotch whisky companies’ continued export success and the consistent investment at home. This report highlights the high rate of domestic tax that Scotch Whisky faces in the UK as well as its quite extraordinary productivity.

The sector performs a crucial role in driving productivity across Scotland. The manufacturer of beverages in Scotland – dominated by Scotch – produces £210,505 GVA per employee. is more productive than the energy sector (including renewables) at £173,511 per head, life sciences at £93,735 per head, and creative industries at £60,712 per head, supporting more than 42,000 jobs across the UK, including 10,500 people directly in Scotland, and 7,000 in rural communities.

I would categorise this Whisky Community in 5 tiers as follows:

Professional Promoters make a living or income from whisky.  Outwith employees of the whisky organisations, distilleries and their P.R. companies, this tier includes;

Whisky Ambassadors; who host tastings at fairs on behalf of whisky companies and clubs and other events.  This is the role that many of the community aspire to achieve enjoying international travel and interaction with the wider community.

Within this group are also some amateurs who volunteer to help at fairs or fill important roles in industry bodies.  The most any can hope for is expenses lots of access to samples and and the odd bottle of scotch, industry and distillery event invitations and some notoriety in the industry.

These number about 50 world wide who I could probably name.  There are also dedicated  Ambassador programmes which include large numbers of individuals engaged on an infrequent basis who are a subset of the Professional Group, maybe 100 but they would normally not even qualify as Social Media influencers and are largely with a few exceptions unknown in the wider community but they might host local events on behalf of single companies.

The second group, the Social Media Influencers are generally unpaid but some particularly on You Tube enjoy support through the advertising revenues and programmes such as Patreon which allows their fans to give monthly donations to support their site.  Most Social Media influencers do it  purely for the enjoyment, community and fun.  They at best get review samples and preferential treatment at Distilleries and a great sense of community through shared tastings both online and at fairs.   Numbers are debatable but probably number no more than 200 daily active advocates.  The influencers promote the industry as a whole and in many cases it is the wider global spirit category.  This group is an expert group globally based but connected on line.   Activities include blogging, social edit reviews and posts, vlogging, tweet tasting, whisky judging, hosting tastings and a number of whisky related activities and ventures.

A big tweet tasting’s hashtag will usually number in the top 10 rankings in the UK such is the interest with the 30 or so tasters from this group coming from Scotland, England, Ireland , Wales, France, Belgium, Holland, Luxembourg, Germany, Scandinavia and further afield.  On twitter each distillery has from 5000 to 50,000 followers.  The overlap of followers is enormous so it is difficult to use this as a guide to market size.

Whisky is an area which thankfully is not beset with fake reviews and advocates pride themselves as being honest and objective.  It is a very positive and supportive community, an exemplar of the best of Social Media.  I have never witnessed poor behaviour, abuse or trolling on line.  Even in the wider forums these individuals contribute positively, constructively and generously.

The third group is the Passionates who engage daily with whisky forums on line, read and write tweets, blog articles etc.  They hold collections numbering tens to a thousands of bottles largely for drinking, a few for investing.  They buy on the recommendations of the Advocates and follow and interact with them.  Just as others on forums read their recommendations.  In this area there are real experts and new members, many spending large amounts of money on whisky.

The Passionates, I estimate number in the low thousands. They are very active, moderating forums and leading discussions, hosting local whisky groups and clubs and tastings.

The fourth Group is the Hobbyist Contributors who join in and engage mainly through Social Media.  Pitching in with their suggested brands to enjoy.  Again there is a large range of knowledge.  Whisky is their hobby. They have other interests but they are sufficiently engaged to participate and follow recommendations.  This group number in the tens of thousands.   The Reddit Whisky forum alone which covers all types of Whisky, scotch, Bourbon, Irish, Rye numbers 84,000 subscribers.  The large U.S. groups over 100,000 members.

The final group I describe as Hobbyist Consumers.  They engage with the rest of the community enough to follow recommendations and enjoy the community but the dip in and out.   They buy a lot of whisky and enjoy drinking and learning.   Because of their numbers these are a very definable target market.  This sector probably numbers a million plus and beyond that a further few million.  Suffice to say In this group expertise varies a lot.  The topic of blends is a perennial confusion and I recently saw Merlot quoted as a favourite malt whisky.   We all start somewhere!  Responses were generous and constructive.

I contend that it is this entire community that enables Scotch Whisky to be so Productive.  All of these sectors write and of course discuss and share whisky with their friends and family which all promotes the industry.

Of course there is a huge market beyond this community of general buyers.  Because shops and other retail outlets purchased are connected to and  influenced by the core community and their purchasing trends, the community has a much wider influence on what sells and is consumed than its numbers suggest.

Thus it is the leverage of the core community that influences the entire global  market.

In Scotland this is recognised by some companies, distilleries and P.R. Agencies who engage actively in community activities and encourage particularly the top 2 groups.

Other companies are more difficult, believing their own Ambassador network is sufficient to ignore this leverage.    There are some of the larger companies who avoid or discourage direct distillery contact and refuse to answer even consumer questions. Eb contact form monitoring is particularly missing.  The attitude in some appears to be these people just want free samples’, true to some extent, I concede.  I am sure that they are plagued with requests but the smallest of research would easily identify serious influencers from thirsty passionates.

I contrast this with my interfaces with U.S. Brands and Cognac Brands in France, both of whom are much more engaged with the influencers and happy and prompt to cooperate.

Samples are the lifeblood of the influencer.  I  invest a lot of my own money to buy samples I cannot access and I review and promote the samples I would recommend. It is great to receive a sample from a distillery but the research, review, photography and writing and publicising takes a long time so works well in both directions, I rest my case.

In my case I would categorise myself as a Social Media Influencer.

I participate in Steve Rush of @TheWhiskyWire and @TweetTastings events for which I am eternally grateful.  I review the bulk of these tasting samples, source photographs and research the products.  I do also get review samples from some distilleries.  I maintain a professional website.

I review Whisky, Bourbon and Rye, Irish Whiskey, Rum, Cognac and Armagnac tasting around 400 spirits a year.  I write and network  almost every day talking with industry professionals on a variety of topics to help them and myself further the cause of whisky.  It is my almost full time hobby but I have hopes of doing more in future or just expanding what I currently do.

The UK. government ought to recognise that the whisky community needs incentivised to buy and to buy more widely.  I watch my U.S. counterparts buying and enjoying whisky that I find too expensive because Scotch and other whiskies are taxed at just 27% of the rate that HM Treasury taxes us here at home. A greater alignment would encourage more promotion of a wider range of Scotch  in the U.K. benefitting the industry, exports and the exchequer simultaneously.

Lessons to be Learnt

In any industry the community that supports, promotes, recommends and discusses your product and service has become more connected and influential through Social Media.  It is more knowledgeable and informed as never before with online access to a breath of information.  This community respondes to engagement and offers great opportunity for leveraging your marketing budget.  Communities thrive on engagement and a little goes a long way as they are largely self energising, monitoring and reenforcing.  Get it wrong at your peril it just cannot be ignored.  Diageo not the best at engaging, I would contend, is much criticised unjustifiably online.  It choses to ignore this and is fortunate that the higher tiers of the community frequently offer defence to its products where the criticism is unfair or ill-informed.

Learning to establish, develop and motivate a community and use it to leverage sales is key for every organisation.  The leverage is the fundamental driver for sales success in future.  Leverage is the viral nature of such communities influence. 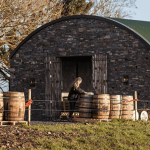 Bonding with the IrishBlended Whisky, Uncategorized